The place to discuss all things Sim Dynasty

I gotta throw a shout out to this codebit, who grew too old for Boston's starting rotation, went to the bullpen and is STILL killing it three years later at age **39** and just this season became Beantown's all time winningest pitcher. (Photo is clickable/tappable to Player Card.)

• Rookie of the Year
• Three Cy Young Awards
• 14 All Star teams, including the last 13 seasons in a row
• No Hitter to his credit 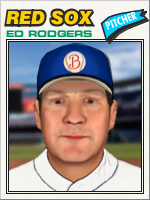