The place to discuss all things Sim Dynasty 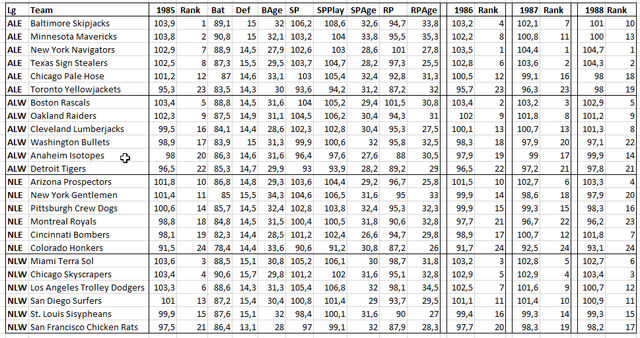 Poor Yellowjackets, a weak team in the strongest division. See you again in 50 days

The ranking algorithm is rather easy: I rank the current value of a player using linear weights - for pitchers its basically C1*CON + C2*VEL + C3*END with some adjustments for defense and health, with some constants C1, C2, C3, for batters I calculate batting power C1*CON + C2*PWR + C3*SPD, take 75% vsR and 25% vsL to get an overall batting power, and assign a bonus/penalty for defense and health.

For the pitchers, pick the best five pitchers with enough endurance to start as starters, but weigh them for the team rating as a #1, #2 and #3 starters will pitch more games than the #4 and #5 starters. The weight is 120% for the best 3, 90% for the 4th and 50% for the 5th starter. The "SPPlay" value is the "playoff strength" of the starters, where I consider only the top 4 starters, with the 4th starter at half weight (as the top 3 will start 6 of 7 playoff games). In the bullpen, I value the 4 best pitchers, with the best reliever (closer) getting 140%, the 2nd reliever 120%, and the other 2 guys 70%. (Personally, that's how I use my pitchers - 1-2 guys to handle all the close games, and the remaining pitchers usually don't pitch a whole lot, and only when the games are not close.)

For the batting value I choose the 8 best batters. I do not consider that a manager may sit players to develop younger ones or chooses players with good mentoring value over better players that are no good mentors. I do factor in defensive ratings - a team that has only C range, A+ arm guys will earn a steep fielding penalty at the 4 infield positions. (All considered, fielding will not change the ranking of a position player group significantly, unless you have really outstanding or really horrible fielders, in which case you might gain or lose a rating point, or two at the most.) 8 Batters are picked regardless of actual position. Essentially, I will choose the best catcher and the 7 strongest remaining players by considering their batting skills and adding a penalty or bonus for their average range+arm rating. (So I will always choose at least one catcher, but may start 3 catchers if they outrank the players from other positions.) Among the 7 non-catchers I will then choose the 4 players with the highest range for the infield, and penalize the team if their values are below certain thresholds (A- or or worse range at 1B, 2B and SS, B+ or worse Arm at SS, B+ or worse arm/range average at 3B) or award a small bonus for better values. For outfielders, arm is weighted higher than range, but the penalty for bad fielding is very small.

The values are normalized such that 100 would represent an average major leaguer in a system 3 league. A rating of 100 makes an average team, as you would expect. A team with a 105 average rating can usually expect 90-100 wins, depending on the competition in the league, a team with a 95 rating faces the threat of a 100 loss season.